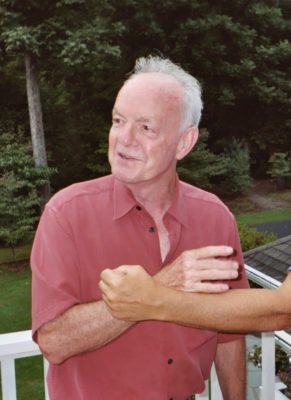 We invite everyone to attend the annual

We will gather annually

on the second Saturday in July

Robert William Smith was born in Richland, Iowa in December of 1926, the Chinese year of the Tiger. From his early days in an orphanage to his later abode in a retirement community in the mountains of North Carolina, his myriad journeys confirmed his conviction that love and friendship are life’s most precious parts. He was a man of many achievements in multiple fields, including, for example, teaching, writing, scholarship and historical research, government service, raconteurship and, most importantly, his family.

Mr. Smith taught students in several martial arts. Initially, he coached boxers in Western boxing. He was an early instructor of Judo in America. For 26 years, he held a free Saturday morning T’ai Chi Ch’uan practice in the Bethesda, Maryland, YMCA, parking lot. This Saturday class began in 1962 and was one of the very first Tai Chi classes in America. He continued these Saturday practices in his later years by attending a free Saturday morning T’ai Chi practice in a North Carolina, YMCA parking lot. In Bethesda, he also offered formal instruction in T’ai Chi Ch’uan, Pa-kua Ch’uan and Hsing-i Ch’uan, the three main elements of Chinese internal martial arts. In addition, he has reached many thousands more with his writings.

Mr. Smith was the first western student of the late grandmaster Cheng Man-ch’ing (aka Zheng Manqing) beginning in Taiwan in 1959. He was the first writer to introduce the now famous Cheng to western readers. He was chosen by Cheng to coauthor the text “T’ai Chi, the Supreme Ultimate”, which was published in the mid 1960’s and was the third book in English on T’ai Chi.

As an early pioneer of Asian martial arts in the West, Mr. Smith provided a positive foundation of historical accuracy while emphasizing the traditional, ethical influences of the often misunderstood and misrepresented martial arts. The bibliography in his “A Complete Guide to Judo,” published in 1958, is still cited by book collectors today while his “Asian Fighting Arts,” coauthored with Donn Draeger in 1969, is the definitive reference on the subject. Mr. Smith is recognized world wide as a seminal figure in introducing the West to the nei-chia (internal martial arts) of China.

As an editor, author, co-author and co-translator, Mr. Smith produced 14 books, including the first books in English on Pa-kua Ch’uan and Hsing-i Ch’uan as well as the aforementioned book on T’ai Chi Ch’uan, co-authored with his teacher, the late Cheng Man-ch’ing. Mr. Smith’s book, “Shaolin Temple Boxing”, introduced Western readers to that now famous Chinese practice as well. He has written dozens of magazine articles, most on martial arts topics. He produced many early films of martial arts greats. In addition, he wrote over 240 book reviews on a wide variety of topics for top newspapers across America. He also penned numerous interviews with authors who caught his interest as well as countless letters to the editor. His poetry has appeared in several anthologies.

Mr. Smith joined the U.S. Marines in 1944 at age 17, served overseas in the Pacific theater with the Fifth Division (Peleliu and Guam) and was among the first troops into southern Japan. He received his undergraduate degree in History from the University of Illinois and his master’s degree in Far Eastern and Russian Studies from the University of Washington in Seattle. In 1955, he joined the CIA as an intelligence officer, going to Taiwan four years later in 1959. There he continued his pursuit of martial arts practice and research. During this time he went to Tokyo and won his third degree black belt in Judo at the Kodokan, the international Judo headquarters.

Mr. Smith was legendary for his stories and jokes. His ability to quote poetry and prose and to tell anecdotes and aphorisms held gatherings large and small enthralled for hours at a time. In addition, he was undefeated in identifying pop songs from the 1930s. His first book (on Judo in 1958) contained a chapter on humor, the first instance of a martial arts book ever doing so. Under the pen name of John F. Gilbey, he wrote “Secret Fighting Arts of the World,” a fictitious send-up of the many completely outrageous martial arts stories he had collected. This produced much hilarity as some gullible readers swallowed the ridiculous tales whole and some even quoted Gilbey in subsequent publications. Gilbey went on to write two additional books, a fable and a newspaper article on, yes, knock-knock jokes. Mr. Smith once put an ad in the Washington Post offering “beginning levitation.” Alas, there were no takers and the class never got off the ground. In addition, there are a few other practical jokes that must remain classified these many decades later, especially those that made the national papers.

In short, Mr. Smith filled his life with joy and whole hearted scholarship
and he taught by example that everything is better when it is leavened with love.

Waiver: By attending this gathering,  you hereby agree to release and hold harmless The T’ai Chi Ch’uan Study Center, Ltd., the instructors and the practice location from any liability for any injury or harm that might result from your attendance and/or participation.