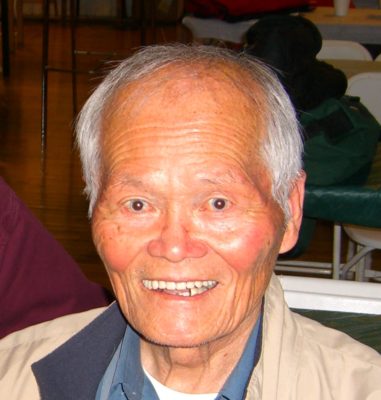 Benjamin Lo (Lo Peng Jeng) passed away on October 27, 2018 and the Tai Chi world lost a great teacher and a great example of true Tai Chi at the highest level.

Mr. Lo began his Tai Chi study in Taiwan in 1949 because he was an ill young man. He said he had trouble walking up one flight of stairs without having to rest. Fortunately, his father was a friend of Cheng Man-ch’ing who was a well known traditional Chinese medicine physician and also a famous martial artist. Mr. Lo became his first student in Taiwan, soon regained his health and later, as Cheng’s top student, he traveled the world presenting Tai Chi to thousands and impressing all with his great skill, humble demeanor and ever ready and compelling smile.

Mr. Lo and Robert W. Smith were good friends and after Mr. Lo’s move to San Francisco, he visited Mr. Smith for about a week in Bethesda, Maryland every year from 1975 to 1988. Mr. Smith’s students enjoyed the great good fortune of attending the daily classes that Mr. Lo conducted during those visits. Mr. Lo was known for his insistence upon the five prime principles of Tai Chi and in particular the principle of sinking down on one leg at a time to support the weight of the body. With every weight shift, he would have us pause and pick up our empty foot while trying not to move our upper body. This built leg strength and balance while testing our willpower and willingness to work hard and it made his classes tremendous and wonderful workouts. We used to say that we spent six months preparing for Mr. Lo’s visit and then six months recovering.

Mr. Lo humbly told us that if he could do it, we could too. Tai Chi, he said, was made of everyday, ordinary stuff. What could be more ordinary than breathing and gravity, for example. The difference, he said, was that the Tai Chi player gave those ordinary things extraordinary attention over a long period of time. And so Mr. Lo was an extraordinary person, an inspiration to his many students and an exemplar of what can be achieved with hard work and dedication to the Tai Chi principles.  We bow deeply to his memory with great gratitude and respect.